Art and Music in Denver and Beyond

Denver Art Museum patrons were given a first look last night at the new Andrew Wyeth/Jamie Wyeth show.  I was lucky enough to attend and while the attendees were glitzed out in diamonds, black tie and sequined gowns with trailing trains, the real beauties were the paintings on the wall, even the immense sow from Jamie Wyeth’s farm.  The two painters take viewers to the coast of Maine – Jamie Wyeth’s Seven Deadly Sins as exhibited by extraordinary seagulls – and the woods of New England.The odd corners of the gallery were alcoves for a red-tailed hawk, a skeleton and a northern goshawk.

There were many favorites, but I was struck with how well Timothy Standring curated this show. He deftly paired the elder with the younger artist.  Jamie has his own style and we are offered a literal glimpse into his time working with Andy Warhol in a miniature diorama. Jamie’s paintings are big pieces that confront the viewer with vivid color and thick swaths of paint.  He takes his father’s efforts at textures and changes it to his medium.

Andrew Wyeth’s drawings that accompanied his finished paintings gave viewers an insight to his process.  His strict lines give way to motion so that the winds in Maine are nearly felt in the gallery. The precision is never cold.  Each painting from the collection pulled from nearly 25 galleries, museums and private collectors reveals a story.  Please see the image of my favorite Andrew Wyeth from the show.

Weather, dogs, nudes and chickens are a few of the topics that the painters delved into for these pieces.  The paintings of the chickens in the box seemed nearly a photograph.  I leaned in to read the notes.  Apparently, Jamie had such trouble with the chickens he taped their feet to the bottom of the box. The Andy Warhol portraits also by Jamie Wyeth are stunning in composition and they seem to resemble Renaissance paintings that gave tribute to a patron, and I’m fairly certain that these were similar acknowledgements.

Please join me in a return visit to this important show that again carves a significant place in the art world for the Denver Art Museum. 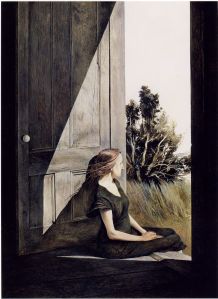